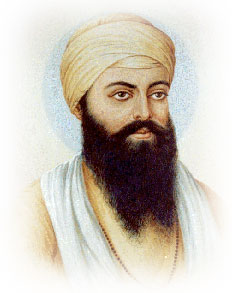 By this time, Sri Harimandar Sahib, the Golden Temple, was almost complete. Baba Prithi Chand, Guru Arjan’s eldest brother was very angry that there were two things that made Sikhs united and strong. One, the city of Amritsar and the Sri Harimandar Sahib were social, political and religious centers. The second was Gurbani.

To be recognized as Guru, Prithi Chand built a Harimandar and a nectar tank at Hehri and also built a Dukh Nivaran Sahib as substitute for Dukh Bhanjani. He also compiled a ‘pothi’ in where there were hymns of the first four Gurus, saints and his own poetry. He composed poetry under the name of Nanak and then passed it out as those of Guru Nanak and other Gurus. On the other hand Prithi Chand’s son Meharvan also started composing poetry under the seal of Nanak. So the number of hymns under the name of Nanak were increasing.

Usually the Sikhs recognized the genuine Gurbani. In Sikhaa(n) bee Bhagat Mala, Bhai Mani Singh has written that some Sikhs such as Bhai Teerath came to Guru Arjun in a group and requested, "When we read or hear Guru’s Bani we enjoy it and are spiritually elevated by it. Both the Sodhis like Prithi Chand and Meharvan have written Bani under the name of Nanak. When we read their poetry our minds become more worldly and egotistical. What is the reason?"

On hearing this, Guru Arjan said to Bhai Gurdas, "At this time Gursikhs known Gurbani, but the Sikhs of the future won’t be able to recognize the genuine from the false poetry, so we must compile all the Guru’s Bani in the form of Granth. The script should be simple Gurmukhi script."

But the situation was quickly becoming so confused that an undiscerning individual could not discriminate between the genuine or the false poetry. One day Guru Arjan heard a hymn of Meharvan being sung by the bards. He told Bhai Gurdas that the genuine hymns should be separated from the false ones, because the Meenas (Prithi Chand and his companions) were mixing them up. This led Guru Arjan to prepare and preserve an anthology of the preceding Sikh Gurus and other saints for posterity in their original form.

Also this was already in the mind of all Gurus to give the World a gift such as it had never experienced before, a source of divine living guidance so clear and penetrating that it could uplift the consciousness of a human being within no time. A gift so pure and essential that it could transcend the boundaries of time and religion and exist beyond personality and human form.

Thus began the compilation of Sri Guru Granth Sahib. Guru Arjan sent out a call to all the Sikhs wherever they were to bring poetry which they had that had been composed by the Gurus.

There was a copy of the 'Pothi Sahib' in two volumes with Baba Mohan, son of Guru Amar Das. In one volume there was the Bani of the Gurus. In the other was the Bani from the Bhagats (saints.) From Baba Mohan, Guru Arjan procured these volumes after much persuasion. Baba Mohan had copied these volumes with great devotion and love. He did not want to part from them. Only his great love and respect for Guru Arjan forced him to surrender them to the Guru. This is made clear in Bansavali Nama written by Kesar Singh Chhibbar.

For this great work, Guru Arjan selected a nice shady place in Amritsar on the bank of a tank dug by him named Ramsar. He took up his abode there and started the work. As Guru knew it would take a long tim for the compilation, he asked Baba Budha to move to Amritsar from Beer (the place where Baba Budha used to reside) and continue spreading the teaching of the Gurus. Bhai Bano (a devotee Sikhs of the Guru) was appointed for other servies at Ramsar. Day and night Bhai Bano served the Sangat and the Guru.

After the collection of all the poetry was finished, Guru Arjan requested Bhai Gurdas to separate Guru’s Bani. Then Guru Arjan personally scanned each verse. One day Guru Arjan asked Bhai Gurdas, "How can you recognize which is the true Gurbani and which is false?" "Only an unfortunate woman would not be able to recognize her husband’s voice," was Bhai Gurdas’ very humble reply. "O Guru, this is 'Khasam Kee Bani,' the Bani of Lord Husband. If in the next room some men are sitting and talking, the husband’s voice will directly strike his wife’s heart."