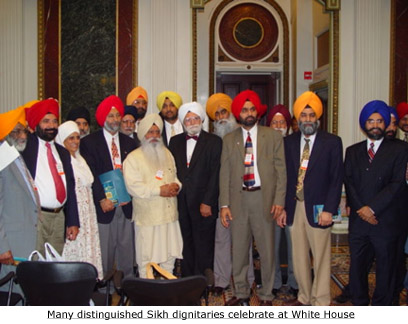 Washington -"Bole So Nihal" was the Sikh greeting called by Tommy Thompson, Secretary of the Department of Health and Human Services while welcoming Sikhs gathered to celebrate the 400th anniversary of Guru Granth Sahib at the White House. "Sat Sri Akal" responded the room full of Sikhs with thunder completing the Sikh greeting which means - 'whoever calls the Timeless Being is true, is blessed'.

"You have strengthened America and we can count on you to play an important role in making this country strong. Your religion was founded to bring justice. Your religion was founded to defend the weak and oppose tyranny. I congratulate you on the 400th anniversary of Guru Granth Sahib on behalf of President Bush who has high regards for your community." Said Bush's Cabinet member Tommy Thompson to high profile Sikhs* from around the United States gathered at this historical occasion.

High officials of the White House greeted Sikhs at the entrance to the White House complex. The program, which began at 3:15 pm, started with a Sikh prayer by Singh Sahib Darshan Singh, former Jathedar of Akal Takhat, the highest seat of Authority in Sikhism, based in Amritsar, India. Traditional Ardas (Prayer) in Punjabi language followed with recitation of hymns and comments by Darshan Singh signifying this auspicious occasion and the translation of which was provided. 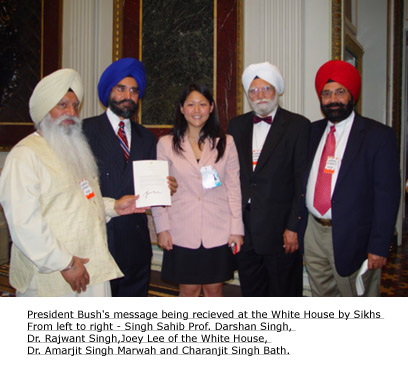 Singh Sahib Darshan Singh, a prominent spiritual leader of the Sikhs, said "The mission of the Sikh scriptures is to connect humanity with God and spread love and justice, peace in the world. The relevance of this has become urgent now more than ever. The Sikhs should rise to the occasion and help make this world more lovable and livable."

He added, "This gesture of the White House is historical and Sikhs are thankful to the American government. The most significant thing is that it is the White House which organized this occasion."

Walls of the Historic Indian Treaty Room at the White House reverberated with the sounds of Sikh Kirtan (Singing of hymns) by the Sikh Choir Group of Guru Gobind Singh Foundation, Rockville, Md. They sang the hymn conveying the universality of the Sikh Scriptures.

Secretary Tommy Thompson lauded the Sikhs for their contributions and challenged them to support his efforts to improve the health of Americans. He also asked for help in fighting diseases in India and elsewhere in the world. He traced his contacts with Sikhs and his travels to Punjab and the Golden Temple. He mentioned his closeness to Darshan Singh Dhaliwal since his days in Wisconsin. He particularly mentioned the 5 symbols important to Sikhs. Other speakers from the White House were Susan Ralston, Special Assistant to the President and assistant to Carl Rove, senior Political Advisor to President Bush, Jeremy White, Special Assistant at the office of Faith Based and Community Initiative, And Uttam Singh Dhillon, Associate Attorney General from the Department of Justice.

Susan Ralston conveyed the greetings from Rove who is traveling during the election season. She said, "The White House is ready to serve you. Please help us help you. The President is very sensitive to your needs." 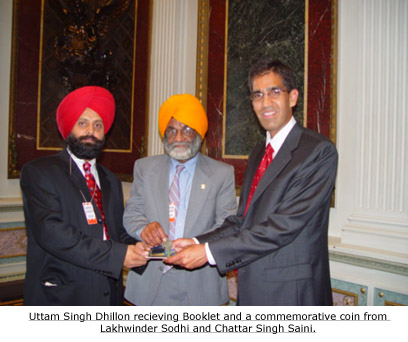 Dhillon, whose ancestors came to U.S. in the early 1900s from Punjab, the homeland of Sikhs in India, said, "The founding principles of this nation and declaration of Independence were preached by the Founders of the Guru Granth Sahib much earlier. This is a great heritage and we add much to this nation."

Jeremy White invited Sikhs to seek funding from the Office of the Faith Based Initiative at the White House for the programs directed for newer immigrants and for after school programs at their Gurdwaras.

Wednesday, September 1st marks the 400th anniversary of the compilation of the Guru Granth Sahib, the Sikh Scriptures and its installation at the Golden Temple (Harmandir Sahib), located in Amritsar, India, in 1604. The scriptures are the guiding principle for the Sikh community since that time.

Dr. Rajwant Singh, National Chairman of the Sikh Council on Religion and Education (SCORE) said, "The Sikh community in the United States is extremely pleased with President Bush's invitation on this auspicious occasion. Sikhs have been in America over 100 years and this definitely sends a strong signal that this White House recognizes the Sikh presence in the U. S."

Dr. Amarjit Singh Marwah, a prominent Sikh leader from Los Angeles who came to U.S. in 1956, said, "It is a priviledge that Sikhs had the celebration at the White House. These moments come rarely. This is not only a historical occasion for people of Sikh origin in United States but all Sikhs world-wide."

Dr. Jasbir Singh Kang from Yuba City said, "This occasion will go down in the history of Sikhs in this country as a milestone. It makes us proud and it will reinforce a positive feeling in our younger generation that we are an important part of the American mainstream."

Satinder Singh Rekhi, Ceo of Multimillion dollar company in California, and who heads the Board of SCORE, said, "We will continue to make our presence felt at the upper echelons of American political establishment and this will be hopefully a continious tradition at the White House."

Harshamir Kaur Gill, a liutenant in the U.S. Air Force and a second generation Sikh said, "This event has made me very proud of being a Sikh and I will continue to serve this country."

There are close to half million Sikhs in the U.S and they have now established a thriving community in the United States and continue to make significant contributions to American society as physicians, high-tech professionals, academics, entrepreneurs, cab drivers and convenience store workers. They are amongst the most hard-working, educated and prosperous groups of Americans. The first Asian American to be elected to U. S. Congress in 1962 was a Sikh from California.

Dr. Singh further added, "President Bush and his administration have been extremely prompt in responding to the needs of the Sikhs. We always remember his leadership immediately after 9/11 and his words of assurance to the Sikh community facing tough times during those days. It is our conviction that President Bush will continue to welcome Sikhs and other diverse groups to the White House signifying that the highest political office of this land belongs to all people."

After 9/11 Sikhs have faced hate crimes with their uncut beards and turbans. Four days after 9/11, a Sikh was gunned down and killed in Mesa, Arizona. President Bush had invited Sikh leaders to a special meeting at the White House days after 9/11 to assure the community of his administration's support.

The majority of people in America who wear a turban are in fact Sikhs. Many in America are unaware about the Sikh traditions and observances and due to this Sikhs have and continue to face harassment at the airports and high security areas.

"We are looking forward to a constructive dialogue and engagement with our government and hope to alleviate situations faced by Sikhs in the U.S." Dr Singh added.