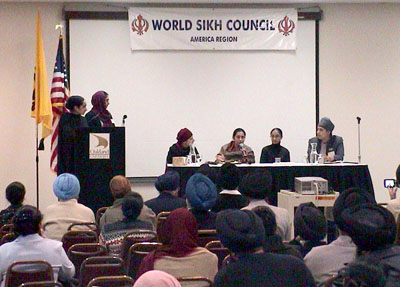 Over two hundred delegates from United States and Canada came to Oakland University to the conference hosted by the Department of Sociology and Anthropology. Conference was cosponsored by World Sikh Council – America Region.

Sardarni Rupinder Kaur, a radio and television program host and human rights activist from Guelph, Ontario began the conference presentation by elaborating on "appraising the higher authorities about the role of women."

Sardarni Palbinder Kaur of Surrey, British Columbia, is a recipient of the distinguished Queen’s Golden Jubilee Medal for Community Service and is currently serving as Director of Fraser Health Authority. She spoke eloquently about the need to recognize and remove all barriers to change, and to adopt the philosophy and model laid down by the Sikh Gurus for gender equality. "Change must occur at individual level; it is only when the individual is recognized as being the vehicle of change that true gender equality can be experienced," she said. Palbinder recited quotes from the Guru Granth Sahib and gave examples to emphasize her point of view.

Sardarni Ramandeep Kaur of Toronto, a well-known keynote speaker passionately spelled out the role of women in the Sikh faith and the role that women played in history. She elaborated on ways for Sikh women to draw inspiration from their great grandmothers in helping to create an environment conducive to infusing the Sikh spirit in new generation.

At the end of morning session conference attendees visited the Sikh Gurdwara of Rochester Hills for langar (Sikh community meal prepared by volunteers).

Peace and Harmony in the House was the theme of presentation by Sardarni Inni Kaur of Norwalk, Connecticut. Inni is Vice-President of Spectrum Communications, a published poet and a member of the Editorial Board of Nishaan – a Sikh magazine celebrating Sikh heritage. Inni delivered a touching lecture on the need and means of developing internal peace and harmony in a family according to Gurmat. She unraveled her personal life experiences and stated how, at one point in her life, "all the pieces in the puzzle came together," by the Guru’s grace, and ever since Sikhi has fulfilled the void in her life. "The Sikh marriage is a physical, emotional and spiritual journey. It is all about love of complete oneness, of perfect balance, and which knows no separation or mistrust."

Sardarni Anahat Kaur of Napa, California emphasized the need to adopt the principle of equal opportunities for all. Anahat, a physician in the Los Angeles area, recipient of the American Heart Association Research Award, and a Board member of the National Conference of Community and Justice of Orange County Region said, "the Sikh Rehat Maryada (principles of Sikh living) makes no distinction based on gender." It provides equal opportunities for Sikh men and women. "Women increasingly are well-represented in positions of authority. Where there is an under-representation, there is a lack of education and organization," she said. Anahat challenged Sikh women to be the Rosa Parks of today!

Coffee break was followed by an extensive interaction by the audience during panel discussion. The active participation of the audience was overtly noticeable during the question time following each presentation.

Sardar Kuldeep Singh, Chair of the Education Committee, in his concluding remarks, reminded the audience of the far sightedness of Guru Nanak, founder of Sikhism. Guru Ji stood against the inequality of gender that prevailed 500 years ago, when rights of Hindu and Muslim women were not equally protected. In United States, even voting rights were denied until the 19th amendment to the US constitution got ratified in 1920. He elaborated on the role played by Sikh women in history and appealed to the audience to walk in the footsteps of the great Sikh Women – Mata Gujri and Mata Bhag Kaur, for saving the younger generation from deviating from the path shown by the Sikh Gurus. He thanked the conference attendees and honored the speakers by presenting them with Sikh Studies Award plaques.

During the conference, the Education and Interfaith committees of the WSC, in collaboration with the Sikh Educational and Religious Foundation of Dublin, Ohio, arranged a Sikh literature display ranging from topics of Sikh theology and history to human rights.

Video recordings of this landmark Sikh conference, on women’s rights and responsibilities, can be obtained by contacting Mr. Kuldeep Singh, 419-304-6761, sikhs@accesstoledo.com.

The Sikh Women conference conducted at Oakland University was one of its kind," said Tejdeep Singh, an attendee from Dayton. "It was a great experience to be a part of the group. The conference was conducted in a very professional and organized way. The concentration and patience of people during all four sessions was a living witness behind their expectations." Darsheel Kaur, one of the younger age participants said "all speakers were excellent but Inni was my favorite, she talked about family love."