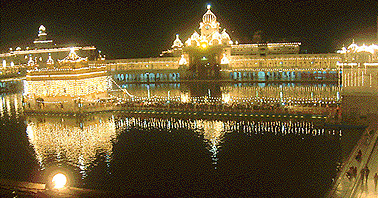 The Golden Temple is all lit up on the eve of Divali on Thursday.
— Tribune photo by Rajiv Sharma

The religious significance of the Diwali festival in all parts of India is centred on a single overall theme - the victory of good over evil, of freedom and joy.

The Third Sikh Guru, Guru Amar Das institutionalized this as one of the special days when all Sikhs would gather to receive the Gurus blessings at Goindwal.

In 1577 the foundation stone of The Golden Temple was laid on Diwali. The Diwali festival took place during the life of the sixth Sikh Guru Hargobind Sahib.

The Muslim Emperor Jahengir, imprisoned the Guru and 52 Kings. The Emperor ruled India at this time. The Asian Indians begged the Emperor to release the Guru and the Emperor agreed but the Guru said also release the kings. Jahengir agreed to release those kings that could hold onto Guru Hargobind's robe. Guru ji had a gown made with 52 string pieces for the Hindus to hold. Subsequently, the Guru and all the Hindu kings were freed at Diwali, Sikhs were very happy when their leader was released. The 'freedom as of one', or 'Bandi Chhor', is the guiding principle for the Diwali celebrations even to this day.

Guru Hargobind Sahib went to the Golden Temple Amritsar in the Punjab. Sikh Diwali is recalled throughout India and in many countries; each year to remember Guru ji's release. At Diwali we worship the religious freedom for Sikhs and this is why Diwali is called the Light Festival. As Guru's Mother was full of happiness that her son was released she ordered food and sweets and gave them to everyone. The worshippers float multi-coloured light candles on the water at the Golden Temple. The gurdwara, hold a grand fireworks display.

SACRIFICE ON DIWALI BHAI MANI SINGH
Bhai Mani Singh was a great Sikh scholar and martyr who was the scribe of the final version of the Guru Granth Sahib under the guidance of Guru Gobind Singh. In 1737 Bhai Mani Singh took permission from the muslim governor of Lahore for the Sikhs to celebrate Diwali at the Golden Temple on the payment of Rs. 5,000 as tax, a practice which had been banned. Not enough people attended Diwali that year because they were afraid of the muslim authorities and as a result not enough money was collected. The muslim authorities arrested Bhai Mani Singh and publicly executed him in Lahore. This great Martyr showed his courage as he recited Sukhmani Sahib while he was cut LIMB BY LIMB, JOINT BY JOINT and remained in high spirits through the torture.Wahe Gurooo Wahe Guroo Wahe Guroo Wahe Guroo.. 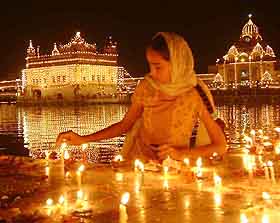 During the Mughal period in the 18th Century, whenever the Sikhs needed to hold an internal meeting or make an order in favour of the community, they had fixed two days of Diwali and Baisakhi. Without any notice each and every Sikhs was aware of the meeting at Akal Takth on the occassion of Diwali.

A prayer for universal prosperity, for peace and happiness, year after year, that's the fragrance and essence that embraces Diwali celebrations at the magnificent Golden Temple, the biggest shrine for Sikhs worldwide.

Thousands turn out for special prayers, each one contributing his own little lamp to the bright light, holding aloft a warm spirit of gay enthusiasm mixed with religious reverence.

At a time of hatred and terror worldwide, the occasion stands out as a symbol of equality and peace.

The golden Temple in Amritsar, brilliantly lit up on the occasion, celebrates just such an event in Sikh mythological history.

Bhai Harbans Singh, a Sikh scholar said, "Amritsar city is very much related with the Diwali festival. When Hindu god Rama returned back home after completing 14 years in exile, the whole world celebrated the occassion of Diwali. My 'message to all Indians, settled all over the world is that in today's time Diwali's significance is that, out of all indifferences and darkness, we have come to a light". (ANI)