Installing the Adi Granth and the First Hukam 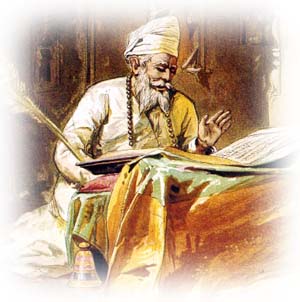 It took about three years to complete the compilation by Guru Arjan. Guru Arjan named it the Adi Granth. "It will not be just a book, but a Granth in which the Word of God will be tied down so that Sikhs can read it, chant it, sing it, remember it and live it," said Guru Arjan. This whole work was finished on August 15, 1604. It took another fifteen days to write the table of contents and bind the Granth. On August 30, 1604, Granth was brought into Sri Harimandar Sahib.

Sikh Sangats were invited for this special day. At Ramsar, Guru Arjan explained the importance and greatness of the Adi Granth. He said that no one should ever try to change a single letter or a word of it. The one who will change it will be foolish and will carry the consequences.

His devotees’ task has the Lord Himself undertaken to fulfill; There Himself has the Lord come to accomplish.
Beauteous the spot, beauteous the Pool, wherein is filled water amrita (nectar) pure.
Filled amrita pure is the water; completed are all objects, fulfilled all desires. Over the world has resounded the sound of the Lord glory.
The Supreme Being perfection incarnate, eternal, immortal whose laudation, Veda and Puranas have sung. Gone are all sorrows.
Nanak on the Lord’s Name was meditated, who his law of grace has fulfilled. (1)

Adi Granth was brought to that place with the same reverence as it was brought from Ramsar to Harimandar Sahib. For the rest of his life, Guru Arjan slept on the floor by the side of the Adi Granth. In this way, he taught the Sikhs to respect and worship the Adi Granth. Guru Arjan had already given the Sikhs a central place to worship, the Golden Temple. He had already organized the sangats under masands better than before. He had already strengthened the practice of giving dasvand to Guru’s house. Now by giving the Adi Granth to the Sikhs he perfected the organization of the faith in every way. He had given the Sikhs a new and effective practical living guidance to worship God through the Word of God.