Senator Michael Switalski spoke eloquently about the principles of the Sikh faith and Sri Guru Granth Sahib. He recognized that the Guru Granth Sahib has a universal message of truth, compassion, equality and service toward all humankind. Thereafter, he introduced to the Senate the attending members of the Sikh Community. All Senators applauded the Sikh members and congratulated them on the anniversary. 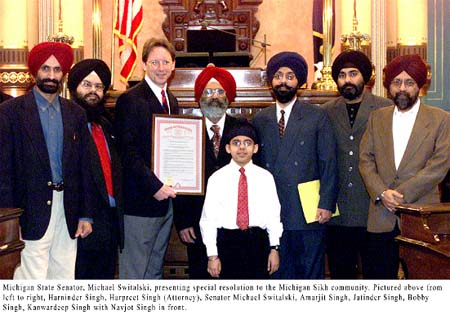 To view the resolution, please see below:

MICHIGAN SENATE RESOLUTION COMMEMORATING THE 400TH ANNIVERSARY
OF THE FIRST INSTALLATION OF THE SRI GURU GRANTH SAHIB AT THE GOLDEN TEMPLE.
By Senators

WHEREAS, Sri Guru Granth Sahib, the Holy Sikh Scripture, is a compilation of the divine revelations not only to the Sikh Gurus but also to the saints of other faiths reaffirming the fundamental unity of all religions; and
WHEREAS, Sri Guru Granth Sahib was revealed to the world through the passive agency of the Sikh Gurus; and
WHEREAS, The Holy Sikh Scripture embodies the Universal message of Truth, Compassion, Peace, Equality, and Service toward all humankind; and
WHEREAS, The fifth Guru of the Sikhs, Guru Arjan Sahib, compiled and consecrated the Holy Sikh Scripture, giving self-definition to the Sikh Nation that originated the Sikh homeland of the Punjab; and
WHEREAS, This year marks the 400th anniversary of the first installation of the Sri Guru Granth Sahib at the Darbar Sahib, commonly known as the Golden Temple, in Amritsar; and
WHEREAS, Sikhs have been a part of the state of Michigan since the early 1950s when the early pioneers settled in the region around Detroit; and
WHEREAS, Sikhs in the state of Michigan are a vibrant community and
Contributes significantly to the economic, social, and cultural well-being of the state and its citizens;
NOW, THEREFORE, BE IT RESOLVED, That the Senate congratulate the Sikh Nation on the 400th anniversary of the installation of Sri Guru Granth Sahib; and
BE IT FURTHER RESOLVED, That copies of this resolution should immediately be transmitted by the Secretary of the Senate to the Sikh Society of Michigan, Madison Heights, Michigan.