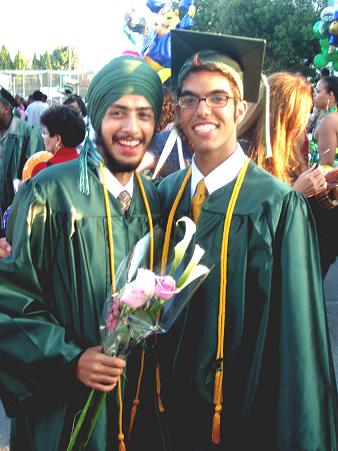 Los Angeles, California: A high school has allowed a Sikh student to participate in graduation ceremonies wearing his turban after initially telling him he would only be allowed to wear a cap. The high school reversed course after the intervention of the Sikh Coalition and local Sikh activists.

Officials at Alexander Hamilton High School in Los Angeles, California, told eighteen year old Harbakshish Singh last week that he could not wear his turban to graduation ceremonies. Citing a school district policy, administrators refused to issue him a graduation gown until he agreed to wear a cap to the ceremony.

Despite pressure, Harbakshish refused to agree to remove his turban. Instead, just two days before the ceremony, a family member contacted the Sikh Coalition requesting its assistance.

The Coalition responded to Harbakshish's request for help in four primary ways:


The day before graduation, without any word on whether he would be allowed to participate with his turban on, Harbakshish boldly decided to try to participate in a graduation ceremony practice. As he arrived at school to begin practice, his school principal approached him and informed him that he would be allowed to wear his turban to the ceremony. The school also contacted Harbakshish's sister who had been anxiously waiting to find out whether her brother would be a part of graduation. The next day, Harbakshish celebrated the completion of his high school career at his graduation along with his classmates.

To learn more about the Sikh Coalition and the work they do please visit http://www.SikhCoalition.org