To commemorate the 20th anniversary of the martyrdom of the Akal Takht, SikhNet is grateful to reprint excerpts from "A Factual Report - Sikhs: Fighting for Justice." This pamphlet was published by the Sikh Dharma Secretariat in 1984 as a way to educate the United States public about what was happening in India with the Sikhs.

The Attack on the Golden Temple

On June 6, 1984, global headlines exploded with the news of the violent attack on the Golden Temple by the Indian National Army. The Golden Temple complex, in the ancient city of Amritsar is located in the northern Indian state of Punjab. 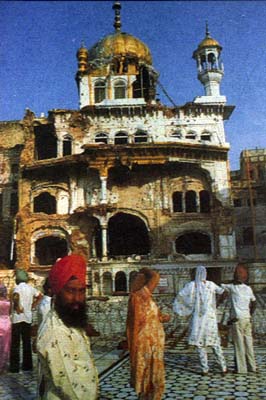 Amritsar and the Golden Temple are the spiritual apex for 15 million Sikhs in India and around the world.

Its religious significance is comparable to that of Mecca or the Vatican City. Telling the predominantly Hindu nation that she would eliminate Sikh "terrorists" in the Punjab, Indira Gandhi took her first fateful step on June 2, 1984 by sealing off the Punjab territory.

"For five days the Punjab has been cut off from the rest of the world. There is a 24-hour curfew. All telephone and telex lines are cut. No foreigners are permitted entry and on Tuesday, all Indian journalists were expelled. There are no newspapers, no trains, no buses - not even a bullock cart can move." Christian Science Monitor, 6/8/84

A few days later, on June 6, 1984, 12,000 Indian Army troops supported by tanks, artillery and helicopters attacked the holiest of Sikh shrines, the Golden Temple of Amritsar. Even the most conservative estimates indicate that more than 1000 Sikhs, including women and children, were killed in the raid upon the holy temple. Sikhs within the complex, although massively outnumbered, defended their sacred temple ferociously and there were substantial Indian Army casualties as well.

The Akal Takhat, one of the two major edifices in the sacred complex, suffered massive destruction. The temple library and museum with their contents of irreplaceable ancient scriptures, artifacts and precious jewels were destroyed and looted. 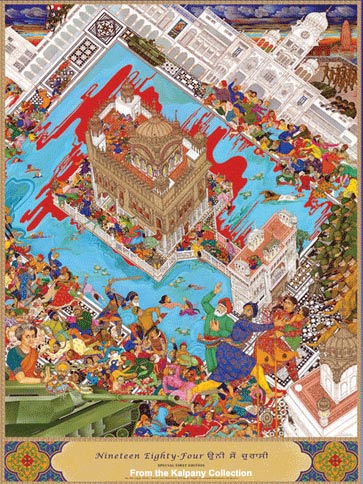 Because the Indian government has maintained a complete press blackout, actual Sikh casualties in the assault on Amritsar can only be approximated. A few Sikhs living in America have been successful in contacting relatives in the region. They provide a picture of savage and immense destruction clearly aimed at breaking the spirit of the Sikhs. Eyewitnesses place the number of casualties at more than 1500. They also describe the "indiscriminate" murder of the Sikh civilians by Indian troops in the bazaars around the temple complex.

"The Amritsar deputy police superintendent, who helped remove bodies from the temple grounds, said at least 13 of the victims were shot with their hands bound.'It was a virtual massacre,' said the Jullundar doctor. 'A large number of women, children and
pilgrims were gunned down.'" Associated Press 6/14/84.

No outside agency has been allowed to enter the area and verify the body count, the extent of the damage or the living conditions of Sikh survivors. All human rights have been suspended. The government has reported 800 dead while outside sources estimate that over 1500 died in Amritsar alone.

Another 2000 are reported to have died in Patiala, 1000 in Mukhtsar, with a total fatality estimate now at more than 10,000 Sikhs throughout Punjab. The numbers of dead and their identities are not being provided to families, agencies of Sikhs nor to any independent agencies.


"As long as the army keeps news reporters and other outsiders from traveling in Punjab except on tightly controlled military tours, there is no way of knowing what excesses might be committed." New York Times 6/8/84.

"Bhindranwale had to be killed," said one highly placed Indian government source..."Better a martyr dead than a political motivator alive." Knight News Service, 6/10/84.

"Mopping up after the death of Jarnail Singh Bhindranwale, the fiery leader of the militants, the government has now arrested more than 3000 of his political and religious followers. The government has also turned up its propaganda machine, suggesting, implausibly, that both Pakistan and the CIA had supported the Sikh separatist movement in an effort to destabilize India." Newsweek 6/25/84. 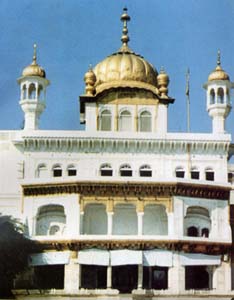 Eight days after the army attack, a team of only six western reporters, accompanied by Indian reporters, were allowed into Punjab for a carefully guided tour of the Golden Temple. No photographs were allowed. But sobering reports were written.

"All around were signs of killing and destruction- bullet-pocked walls and parapets, minarets with their tops sheared away, marble esplanades still wet from hosing to remove the blood." New York Times 6/16/84.

The human rights of the 11 million Sikhs of Punjab are a matter of concern to all people who live in the free world.

"In these days, the news has followed the ever more serious events in the state of Punjab. I do not want to go into the delicate and complex motives behind these disturbances in a great nation. But the sad fact is that the place where so many people met a tragic death is a temple where men gather in prayer.

I address an immediate sentiment of human pity for all the victims with a call that a way to resolve the current strife can be found in a mutual understanding..." Pope John Paul II.


The Sikh Contribution to Democratic India

During India's struggle for independence, Sikhs fought against the British at great personal cost. In the successful fight for independence, 3,697 Sikhs were hanged, killed or imprisoned for life, versus 1,074 non-Sikhs.

When India was granted independence and partitioned in 1947, massive populations of Muslims and Hindus were given their own geographic nation. The hard-working and hard-fighting Sikhs decided to join with predominantly Hindu India and put their faith in the Indian government to protect their interests.

After receiving such firm and solemn promises in clear and unambiguous terms from the Congress Party leaders, Sikhs decided to throw in their lot with India and did not press the British government for an independent Sikh state. They had wholeheartedly and vigorously supported the freedom struggle and suffered greatly for the cause.

Promises of religious freedom and self-determination made to them by Mahatma Gandhi and Mr. Nehru were never fulfilled.

No sooner had the country achieved independence when all past promises, declarations and assurances made to the Sikhs, and the sacrifices made by the Sikhs were forgotten.

With the partition of India to form the Moslem state of Pakistan, 60% of the agriculturally developed lands of the Sikhs went to Pakistan and the Sikhs migrated to Indian Punjab to make their new homes on barren land. Through their skill and industry, this land was transformed by a "green revolution" and now provides 60% of the food supply for all of India, including 70% of all the wheat and 50% of the rice.

"It was the Sikhs who helped spawn the "green revolution" in agriculture- the single most stunning accomplishment of India's independent years." Christian Science Monitor. 6/18/84

"Industrious and ambitious, the Sikhs have turned Punjab, one of the few areas in which they form a majority, into a model of agricultural efficiency, thereby helping make India self-sufficient in wheat." Time Magazine, 6/18/84

Throughout their history, Sikhs have earned great distinction by standing in defense of the rights of other religious peoples, notably the Hindus. Historically, thousands of Sikhs gave their lives to protect the nonviolent Hindus against the abuse of the ruthless Moguls who forcibly imposed Islam upon India for several centuries. At the time of the fight for independence from Great Britain, 60% of the military was composed of Sikhs although they were only 2% of the total population.

The Sikhs are a people who value human rights, who have defended India against scores of invaders throughout the centuries, and who contribute in all respects to the independent nation of India.