SIKH REPRESENTATIVES MEET U.S. CONGRESSIONAL LEADERS
Sikh Memorial Dinner at the Capitol, Washington, D.C.
Under the Dome of The Capitol. Three Months to the Day. The Sikhs Remember and Move Forward. 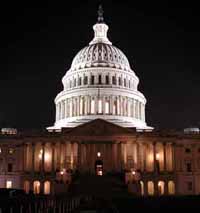 It was an evening to remember in Washington. On Tuesday, December 11, three months to the day, after the September 11 Tragedy, Sikh Leadership of all ages from the across the United States and Canada gathered under the dome of U.S. Capitol Building for the First Annual "One Nation United Memorial Program" sponsored by the Washington based Sikh Council on Religion and Education. They came to remember, to pray and to stand together as a community.


Senator Hillary Rodham Clinton delivered a strong and compassionate speech to those in attendance. "We will always remember the sacrifices that were made by the Sikh Community in the wake of the terrible terrorist attacks of Sept. 11. No community suffered greater loss as a reaction to the terrible losses" on that fateful Tuesday in September. "I offer my condolences and sympathy to the entire community".


Senator Richard Durbin and Congressman Mike Honda were the Guests of Honor. The Senior Senator from Illinois in summarizing what inspired him to introduce his resolution in the Senate recalled that "on the morning of September 11, 2001, our world as we knew it changed forever. Unfortunately, in the aftermath of September 11, there were those, who in misguided anger and fear turned on their neighbors and fellow Americans."

He proudly reflected upon his Lithuanian Ancestry and the broad cross section of cultures, nationalities and religious freedoms that have made America great…. noting that "we must embrace the diversity that makes America what it is, a diversity that our enemies cannot understand or accept. We are a land of immigrants, and from the beginning of our Nation's history, we have always welcomed people from other nations. Of the thousands who perished that tragic day of September 11, citizens of over 80 countries were included among Americans. Sikh-Americans share with us the pain and sorrow of September 11 tragedy. Hate crimes and violence, especially violence stemming from bias and bigotry should never be tolerated. That is why I submitted the resolution condemning bigotry and violence against Sikh Americans."

Congressman Mike Honda, who sponsored the House resolution condemning the attacks on Sikhs, "It is a testament to the integrity of the Sikh American community that so many people of different faiths and backgrounds have come together to support them and join us in our effort to promote racial and religious tolerance in the aftermath of September 11th.I am very pleased to have worked with the Sikhs to convince Congress to pass a Resolution that informs all those who would target their fellow Americans simply because of their appearance or faith, that acts of hatred and brutality will never stand and will not be tolerated."

He assured those in attendance that he would "continue to work with Sikh Americans, Arab Americans and all the groups representing the diverse mosaic of culture and religion in our nation to protect our most sacred principles of civil liberty and free exercise of religion"

Calling his murder a tragedy that should have never happened, U.S. Rep. Ed Royce addressed the tragic consequences of hate during the memorial service for Balbir Singh Sodhi. "We all mourn this loss. He was the father of five children and moved to the United States 10 years ago. Neighbors and customers said that he always had a kind word to say and that he used to hand out candy to children. It is nothing short of a tragedy that someone would take his life in such a cold-blooded way," Royce said.

Royce, co-chairman of the Congressional Caucus on India, praised the courage and strength of the 500,000 Sikh-Americans. "Sikh-Americans have suffered both verbal and physical assaults as a result of misguided anger toward the Taliban," Royce said. "This is only the latest hardship Sikhs have endured through a long history of oppression, but their faith, courage and strength will carry them through."

He also said out that every American, regardless of their background, should be treated with respect and dignity and should promote religious tolerance. In fact, Royce recently asked Los Angeles County Sheriff Lee Baca, Orange County Sheriff Mike Carona and local district attorneys to prosecute acts of violence, intimidation and hate crimes against the to the fullest extent of the law. "I am proud to be an original cosponsor of a resolution in Congress condemning bigotry and violence against Sikh-Americans. Every American should be treated with respect and dignity, and we should all work harder at promoting religious tolerance in the United States and India," Royce said.

Congressman Tom Udall observed that through it all, the American people and the Sikh Community in the United States have persevered and come together. "Out of the heart of darkness comes the heartbeat of renewal. With their support, the Sikh community has shown that they are going to be full partners in restoring New York to its rightful place and I thank them."

In summary, Dr Rajwant Singh, Founding President of the Sikh Council said, "The tragic events of September 11 brought out the very best in most of us as individuals and as a country. Unfortunately, at a time of great grief, sorrow and heightened security, the aftershocks were not altogether positive. Sikh leaders, and friends of the Sikh Community, representing California, New York, Illinois, Florida, New Jersey, Delaware, Virginia, Maryland, Arizona, New Mexico, the District of Columbia and Canada were here with us today. They came to grieve, to be heard, to support each other and renew their commitment to their faith and country. They left motivated to do what is necessary to play a role in the community and society."

Placing the program in context, Dr. Singh emphasized, "The One Nation United Memorial Program was indeed the culmination of a lot of blood sweat and tears…but should be viewed as the beginning…not the end. What September 11 taught us… is that we have much work to do and that we cannot expect the general public to know about Sikhism, our virtues and our values. To the contrary, it our responsibility to be proactive, to educate, to be involved and to reach out. In the end, our measure of success will be what we do to build upon the foundation of understanding that we witnessed tonight."

In addition to the "One Nation United Memorial Program," the Sikh Council has been active on a number of fronts since the September 11 Tragedy. On September 26, Dr. Singh was asked to serve as spokesperson, by the White House, when President Bush met with Sikh leaders from around the country to discuss the severity of the crisis. The organization represented the Sikh Community at the National Association for the Advancement of Colored People (NAACP) 6th National Religious Leaders Summit, in late October, as well as worked with other Sikh Organizations to secure passage of the aforementioned Congressional Resolution.