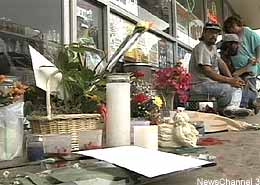 Sukhvir Singh worked as a humble clerk in a Tempe convenience store. In keeping with the tenants of the Sikh faith, he did his best to help others and would often give odd jobs to the transient people in the area, assisting them in making a little bit of money. On Tuesday evening, September 23rd, Sukhvir Singh was stabbed to death. Yesterday, the police brought Philip Bruce Reed into custody and charged him with first degree murder. Residents of the area are bringing flowers to the convenience store to express sympathy to the family and the community.

On September 15, 2001, Balbir Singh Sodhi was shot and killed in what authorities have called a hate crime following the September 11th attacks in New York and Washington. Like Sukhvir Singh, Balbir Singh had a reputation of helping those in need. Right now, Frank Silva Roque is standing trial for that murder.

"We are grateful that the Tempe and Mesa police have taken strong action and immediately arrested the possible perpetrator. We have tremendous faith in our justice system and the police agencies of the valley.

As you know, the Sikh faith preaches universal equality, and transcends the boundaries of race, class, gender, creed, and ethnicity. Sikhs believe that all people have the right to follow their own path to God, without condemnation or coercion from others. We have devoted our lives to protecting and upholding all people right to practice their faith in freedom.

Sikhs are hard working Americans as you see through the life of Sukhvir Singh (the elder of three children), who came to the United States in 1997 and worked seven days a week at the convenience store. Still in the midst of all of his pressure of settling in America, his life exemplified the basic Sikh spirit to serve and reach out to those in need.

The central belief for Sikhs is that there is one God for all of creation, a loving Creator attainable through meditation upon God's Name. In addition, Sikhs are to lead moral lives, earn their living through honest means, and to share with others in need.

Sikhs have a long, celebrated heritage of speaking out against injustice, and standing up for the defenseless. Sikhs have an affirmative duty to put themselves in harm's way to protect innocent people who cannot protect themselves.

Recent news events or reaction to Balbir Singh Sodhi hate crimes trial may have an impact on motivating an individual to engage in bias or anger - motivated crimes. Targeting a person because of their ethnic background or national origin is often a basis for a bias crime violation.

The fight against hate and violence takes all of us as community leaders to be willing to take a strong stand condemning acts of hostility, the killing of innocent people, so other victim(s), their families, and community are not traumatized and targeted.

Together we can help others to evolve past hate and fear by continuing to organize to reach out to others with increased understanding, respect, and support. May our collective prayer be that God preserve and protect the honor of all people, our nation, and our world."