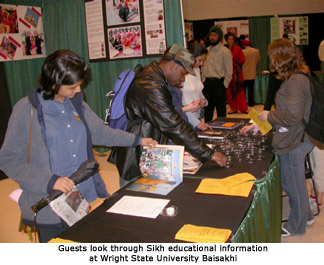 Dayton (USA), 25 April- To promote and improve awareness of students, faculty and invited guests about the Sikh faith and culture and as part of ongoing efforts to understand diversity of cultures that brings richness to the community, an exhibition on Sikhism was organized at the Wright State University, Dayton Ohio.

Mai Nguyen, Director, AHNA Center, in her opening remarks welcomed the invited guests and said that events such as this would bring people from different cultures closer together and bridge the gap of understanding. She thanked the Sikh Society of Dayton, Sikh Student Association, faculty and staff for sharing their culture. Sameep Singh Gumtala, President of SSA and a Ph.D student in Electrical Engineering, welcomed everyone on behalf of the association. Dr. Kuldip Singh Rattan, faculty advisor for SSA and professor in Electrical Engineering, thanked AHNA center, Katie Dedrick, director of student life, Surjit Singh of Amar India Restaurant for providing the food and everyone for joining in the Sikh New Year celebrations. He gave a special recognition to Dr. Darshan Singh Sehbi, Sameep Singh Gumtala and Tejdeep Singh Rattan, Treasurer SSA for working so hard in preparing the exhibition.

Kathie Morris, who came on behalf of Dr. Dan Abrahamowicz, Vice President for Student Affairs & Enrollment Services, WSU, appreciated the efforts of different organizations to bring people from so many different departments to participate in an event focused on the history and culture of the Sikh community. She said that today’s exhibition has greatly increased her understanding about Sikhism.

In his address, Dr. Darshan Singh Sehbi, assistant professor, School of Medicine, WSU, shared his thoughts and explained how it all started. He said that the sad memories and images of September eleven tragedy were still fresh in his mind. He recalled the loss of several thousand innocent fellow Americans. He said that while he was still in a state of shock the grief was compounded by the news of hate crimes that began to follow in the aftermath. Two days later Balbir Singh Sodhi was killed as a case of mistaken identity due to wearing a turban and sporting a beard. He said that he found it difficult to understand that Sikhs who have been in the US for almost a hundred years and the fact that Sikhs have served in allied forces during World war, some people did not know about the identity of Sikhs. He felt the need for all of us to learn about our neighbors and familiarize ourselves with the rich diversity of people living in America. He concluded that we decided to do these events and reach out to public in order to promote mutual understanding.

S. Kuldip Singh, a well known statesman and chairman of the World Sikh Council, America region, gave a brief description of the background of the Sikhs, their contributions and sacrifices made by them to defend the basic rights and beliefs of all humanity. He said that Sikhs were protectors of human rights, and it is the duty of every Sikh to protect people from injustice, torture and suffering. He believed that they were the custodians of human rights.

Visitors enjoyed the presentation of Bhangra, Gidha and performance of Gatka (Sikh Martial Art), by young artists from Cincinnati. The exhibition was well supported by visitors from neighboring cities of Cincinnati, Columbus and Cleveland. Visitors were also fascinated by the Kara (Bracelet) that they took home as a souvenir. The exhibits covered wide ranging topics of Sikh history, teaching of Sikh gurus, Sikh culture aspects such as wedding and other festive celebrations.

The status and role of women in Sikh history, message of universal brotherhood and importance of Sewa in the Sikh way of life were highlighted. The exhibits that drew maximum attraction were Sikh-Warriors, distinctive quality of turban worn by Sikhs and Bhai Kanhaiya.

The event was a great success drawing a gathering of about 350 people. The guests asked many interesting questions and provided valuable feedback with many positive and encouraging statements about the event. Many guests said that they would have liked to see some volunteers demonstrating the tying of turban.