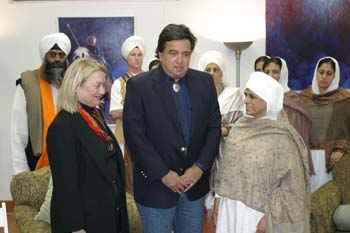 After a private meeting with Bibi Inderjit Kaur, the widow of the holy man, Richardson addressed an international gathering of guests coming to pay respects to Yogi Bhajan. Richardson poignantly remembered his "friend and peer" who came from India to America in 1968. Yogi Bhajan was, he said, "a man with strong views…a leader beyond the Sikh community."

Richardson candidly shared one of his early meetings with the imposing 6'3" man he lovingly referred to as "Yogiji." After losing his 1980 bid for Congress, Richardson received helpful political advice from the Master of Kundalini Yoga on how to win the election. He was told to "shake every single hand," he said.

Richardson considered Yogi Bhajan, Ph.D. not only a spiritual guide but a savvy businessman who created wealth and economic growth for New Mexico. He confirmed the spiritual leader as a knowledgeable political leader as well. Richardson confided that he had arranged for top American intelligence officials to consult with "Yogiji" in Washington D.C. on the potentially explosive dynamics of South Asian politics concerning India and Pakistan. He said in his speech at the memorial service, "Yogi Bhajan was right on so many of those predictions he had made. I wish we had taken his advice." 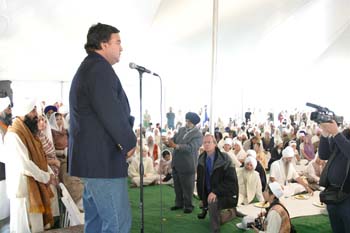 Richardson lauded the International Peace Prayer Day, founded by Yogi Bhajan. "This was an important event, not just for New Mexico and the Southwest, but an important event for America and the world," Richardson stated. "His passion was peace. He hated wars, but he recognized that sometimes warriors must do the right thing." Richardson reminisced about his conversations with Yogi Bhajan, when, as the UN Ambassador, he would receive advice from the holy man on various international issues. "He was very blunt…but looking back he almost always was right."

Richardson and the First Lady welcomed the distinguished visitors from around the world, who came to celebrate Yogiji’s life. "I know he is smiling and he has left an incredible legacy on all of us. [He was] a good decent man who was strong, who cared deeply about humanity and peace, refugees and the scourge of age and disease; a man who cared deeply about alleviating poverty, and who was a champion of his community here in New Mexico. He influenced politicians…Senators, Governors, Presidents and was a man whom two days ago I discussed with President Bill Clinton, both men of passion and compassion, in a positive way."

Richardson read the proclamation, issued today and presented it to Bibiji, the wife of Yogi Bhajan. The statement told about the life of a man who transformed the lives of millions. In the words of Rudyard Kipling, Poet Laureate of India, Yogi Bhajan was able to "talk with crowds and keep his virtue, and to walk with kings--nor lose the common touch." He was a man who was able to "fill the unforgiving moment with sixty minutes worth of distance run." In Governor Richardson’s book, his friend and advisor was "a great man whose legacy will be with us forever."