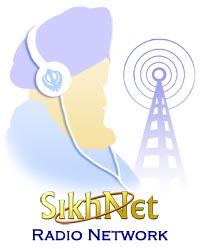 Here at SikhNet we have long visualized a "Virtual Gurdwara" on the Web where anyone can come at any time and be in the presence of the Guru through Gurdwara services from around the world - Kirtan, Ardaas, Hukum - all broadcast live 24/7.

Now we have come a bit closer to that vision by launching a brand new multi-channel SikhNet Radio service that allows Gurdwaras around the world to broadcast their daily Kirtan program live on the internet. We have already added live broadcast streams from six Gurdwaras in India, Canada, and the USA. So any time of the day or night you can tune into Kirtan that is happening live somewhere in the world! In addition to the live Gurdwara broadcasts we have also just added two additional new SikhNet Radio channels: "Western / Non Traditional" and "Classical Raag."These new channels are now broadcasting alongside the original SikhNet Radio "channel".

Our goal is to create a network where you can watch or listen to Gurbani Kirtan live, in real-time from Gurdwaras all over the world. Each Gurdwara becomes a "Channel" (Like a TV Channel) on the SikhNet Radio Network, and will be featured on SikhNet.com, so thousands of people can listen in from all over.

Do You Want to Join the SikhNet Radio Network and broadcast your local Gurdwara live on the internet? For a limited time we are accepting new Gurdwaras for the live broadcast. View more details


Do You Want to Join the SikhNet Radio Network and broadcast your local Gurdwara live on the internet? For a limited time we are accepting new Gurdwaras for the live broadcast. The following are some of the requirements that must be met in order for us to do a live broadcast from your Gurdwara.


If you have the above mentioned things taken care of and would like to get your local Gurdwara broadcast live online through SikhNet Radio, then please contact us and we will send you more information on how to get setup and broadcasting.