New! Read my blog (web log) with new pictures and happenings in my life.

Ever since I can remember, I have felt that I have never been able to get my hands on enough information about Sikhism, nor had I ever found a way to interact with Sikhs from around the world. I have had a constant yearning to learn more about Sikhism and to understand what it means to live as a Sikh both spiritually and scientifically. 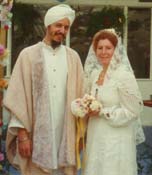 I was born on March 24th, 1975 in Los Angeles, California. from the most wonderful mother S.S. Sat Kirin Kaur Khalsa & father Govinda Singh Khalsa. My mother was raised Jewish and my father was raised in the Christian religion. They both came into contact with Sikhism after studying Kundalini Yoga & Meditation with Siri Singh Sahib Bhai Sahib Harbhajan Singh Khalsa Yogi Ji. As they spent more time with Yogi Bhajan they became more and more interested in wearing a turban and living as Sikhs. A few years later they adopted the Sikh religion and were arranged to be married. Two years later I was born.

When I was 7 years old my parents sent me to India (Mussoorie - GNFC / Guru Nanak Fifth Centenary School & then Dehradun - GRD Academy / Guru Ram Das Academy) for my education, along with a group of about 120 other American Sikh children. I faced many difficulties and hardships that gave me a discipline and experience early on that I may have never had if I was in America. It made me see the world in a whole new light and exposed me to a wide variety of cultures, languages, religions, people and climates. The experience was similar to forming a diamond out of a lump of coal. There is much to see and experience in this world! 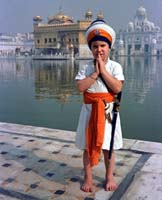 From early on, my parents instilled in me the values and practices of living as a Sikh. We would get up early in the morning, take a cold shower (which I dreaded at the time), and then get together with many of the other Sikhs in our area to recite Japji and practice Kundalini Yoga (to stretch and exercise our bodies). After the yoga we would do about an hour of meditation to various mantras from the Siri Guru Granth Sahib, followed then by Gurdwara. This started our day by giving 2-1/2 hours to the Guru......10% of our day.

I studied in India for about 11 years (1983 - 1994) during which I developed many different interests and passions, including photography, computers, wood carving, electronics, basket ball, fixing and making every thinkable gadget, Kundalini yoga and meditation, singing, and understanding the mind, body and spirit.

From a young age my parents taught me to tune into my innerself to experience God. I feel very privileged to have been raised this way. I have always been interested in knowing how/why things work. I have asked questions constantly in search of learning more. I have read book after book wishing there was more information and better resources on Sikhism. I have always been enthralled with the science of Kundalini Yoga and have practiced often when I felt down or when I was going through hard times. It has been one of the things that has kept me going and tuned into my inner self. Our minds can can become so cluttered. If we do not do a little "house cleaning" we can not function properly. Our emotions get out of hand, we become reactive, and do not think as clearly.

I am a strong believer in taking control of our lives. We can either let life take us where it wants (like a person floating aimlessly on a river) or we can take control and make our lives fruitful and full of happiness. You never know what could be ahead of you. There could be a waterfall right up ahead! Do not confuse "taking control" with, letting the Guru guide and take care of your affairs. I try to give all my problems and affairs to the Guru, knowing that it will be taken care of. BUT....I do not just sit around doing nothing expecting the world to come to me.

It is very hard in this new age to grow up in a western world living as a Sikh. We stand out so much and attract a lot of attention, so you are always feeling like you are "in the spotlight". I can understand why many young people have a hard time. There is a feeling of separation... and longing to belong with peers. Wanting to "fit in" and be "normal". I know this because I , myself, went through it and it was not easy!! Even the most well-raised and spiritual person is subject to the Maya of the world. What I discovered was that you really have to have an experience of being a Sikh to value it.

When I hung out with friends who were "devoted Sikhs" I stayed more focused, practiced, and remembered what this lifestyle (Sikhism) was all about. But on the other hand, if I was with people who did not have a spiritual practice it dragged me down, and the more I was with them, the more I lost touch with why I was a Sikh. Remain in the company of the Holy!

Many parents are not able to explain to their children why they are Sikhs and can not (or do not) teach them how to have an experience with the Guru. Because of this there is a lot of doubt in young Sikh children's minds. Whenever I was confronted with a situation that would compromise my Sikh beliefs it would be like a battle going on in my head. Doubts of why I did certain things would flood my head (why I grew my hair, wore a turban, dressed in bana, etc. etc.). It was a balance scale in my mind. Trying to justify doing things. Questioning all of my Sikh beliefs and not really understanding. It is kind of like believing in God. God cannot be explained....but only experienced. The same way with Sikhism; we can give all the intellectual and scientific reasons... but Sikhism can still mean nothing unless you practice and experience living as a true Sikh. This was the hardship that I and many friends have gone through while constantly asking, why we do "this" and why we do "that". Many of my friends are no longer Sikhs. I understood their situation, and love them just the same. We all have to choose our direction in life. I feel happy and very lucky that the Guru has given me this path. We are given this life as a gift. What we do with it is our choice. We can waste it away, or experience it to the fullest. The Guru has given us the gift of Bana, Bani, Seva, and Simran. He has crowned us like kings and queens!

My hope with Sikhnet was to reach out to people and help them interact and share information, knowledge and experiences. It is the Sikh-Network: networking Sikhs around the world. I feel that it is my duty to share and try to provide what I always wished I had when I was growing up. This was my driving force as I built Sikhnet over the last 3 years. Many, many long nights sleeping in the office on the floor (during the weekend), because I did not have a car to drive into the office (and no computer at home). I only had nights and weekends to work on the web site....so I had to get as much done as I could. There was so much to do! I was feeling the creative flow and wanted to go non-stop. That was all I wanted to do, but I knew that I had to work and make a living too.

Recently, due to being on the computer WAY too much, I started developing Carpal Tunnel Syndome and had to leave my job for many months to give my body a chance to heal. It was a hard time for me, feeling like I was disabled and unable to do the work that I was most passionate about. Sikhnet had become part of my life, and what I did with every free moment of my waking hours, so it was hard to imagine that I would have to stop.

It had been a long year, trying just about everything, but with little improvement. I decided to quit my job and work part time for the Sikh Dharma organization here in New Mexico, working on the Sikhnet web site and various other projects. I could not stop working on Sikhnet. It meant too much to me. It is hard to give up something when you see on a daily basis how it effects people's lives. I felt that I would rather make a little money and be very satisfied with my work then make a lot of money doing work that was not fulfilling. It is nice to have a job that is beyond "Me". It gives my life purpose. By the grace of Guru Ram Das and the many prayers of my friends and family I am on the road to recovery! My body has been healing and I have been able to continue being an instrument of God to help enlighten people's lives. God has given us all certain skills, and I feel that they are best used when unselfish in purpose.

I am now living in Espanola, New Mexico (USA), Working full time on Sikhnet. I am married to the most wonderful woman, Arjan Kaur Khalsa, who is everything I have always wanted in a wife. She is a Doctor of Chiropractic (Chiropractor) and helps people every day to deal with health problems and pain.

I hope this page has not seemed too long. I really wanted to express my feelings and to share a few of my experiences. There is so much to say! I feel that we all need to reach out to others and help in any way possible. It is by the grace of God that I am on this planet doing what I am doing and contributing in any way possible. As we say: Wahe Guru Ji Ka Khalsa, Wahe Guru Ji Ki Fateh...... this sums up how I feel.

You can now also watch various videos from my wedding, wedding reception, a film from when I was a young kid, and some music of my mother (Sat Kirin Kaur).