My dream has always been to devote my life to seva. Being so busy from the time I was a child with so many lessons and later working and going to school full time, I always thought it would be much later before I could do this. Though I realized I may have too many responsibities now to compeletely devote my life to seva, it is important that I make an effort and do the best I can right now. In Espaþola I am surrounded by so much Cherdi Kala. I have many examples of devotion, courage, strength, and excellence in all of life's facets. From a common passion for seva, a group was formed here. We are called SEVA, which is the Sikh Espaþola Volunteer Association. We are a group that intends to organize and participate in opportunities to serve locally. We have the intention to help and to increase awareness in our local community. When hurricane Katrina created so much havoc many people had the idea to serve. Our small group also voted to help. Having recently formed SEVA this was our first successful mission.

Having just formed our group from common ideals, we were blessed to have the opportunity to serve with a well-established and excellent group called United Sikhs. They jumped into action and were in need of assistance with their seva efforts.

The experience in Louisiana was unforgettable. It was a trip of firsts for me. It was my first time in Louisiana and getting off the plane was brand new to me. That night I was blessed with an opportunity to participate in the agan bayth. This was another thing I've never done before. As many people know their was a recovered bir ji in the Gurdwara floating on top of the water. Also there was another bir ji and some gutkas that were damaged. These were creamated before we arrived. The night of our arrival a few of us took the ashes to release them into the Mississippi river. (See attached picture) It was raining and there were huge lightening bolts all around while we did an ardas and let the ashes go.

The next day was my first trip to New Orleans. This was the first time in my life I had ever seen so much destruction. In some places nothing was spared. There was reckage of houses and cars and boats and combinations of all. The cars and boats were strewn about like toys and many houses were completely levelled. Most of the houses that were not levelled were flooded. In some neighborhoods the houses seemed untouched by wind, but every one had a line indicating where the grimy water had risen. (See picture)

United Sikhs had many efforts going and I participated in varied activites. One day I helped some community members recover a few things from the upstairs of their ruined house in New Orleans. On another day I helped serve meals. I also helped move supplies for a school so that they could have classes in a temporary location outside of New Orleans. I also helped with the organization of a shelter and the moving of supplies that were more needed elsewhere.

Throughout the different seva experiences the best part was to get together as a sangat in the mornings and evenings to meditate and read banis, to do kirtan and ardas, and to receive a hukam from the recovered bir ji. Different people came and went throughout the days and small groups did different services, but we all met at the command center at some point. (see picture) There was a feeling of sangat and of seva. There was service and there was devotion. It felt like a balance of Miri and Piri, we had the temporal efforts of helping those who need our help, and we had the spiritual help sent forth by each line of Gurbani sung with love.

I look forward to a bright future for United Sikhs and for SEVA. It is truly a blessing to serve and to have local and international organizations devoted to that mission. The Sikh path embodies all of the highest of human ideals. We are blessed to know them and to live up to them. WaheGuru Ji Ka Khalsa, WaheGuru Ji Ki Fateh! 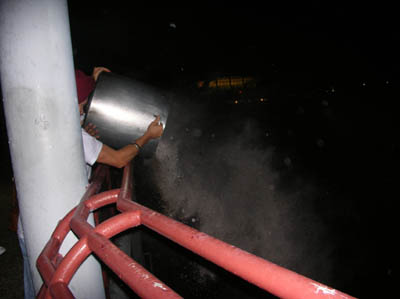 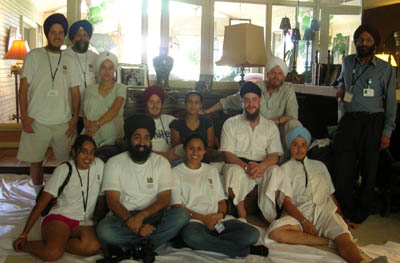 Friday evening we participated in an “Agan Bait” in which we carried the ashes of an old copy of the SGGS as well as ashes of Sunder Gutkas and Nitnems that had all been recovered from the New Orleans gurdwara and had been damaged by the flood waters. We took the ashes in a large pot to the River Center in downtown Baton Rouge where we parked and walked out onto a platform that extends part of the way into the Mississippi river. We carried the pot partially on our shoulders so that it was elevated. At the end of this platform we did an Ardas while a serious thunderstorm took place. Rain was coming in from all angles with strong winds and lightening that looked like fireworks, while it was getting progressively darker. At the end of the Ardas we poured the ashes over the railing into the Mississippi. The wind was so strong that it blew the ashes far out over the river and into the eyes and mouths of the two of us that were pouring out the ashes.
Saturday we drove to New Orleans to help a Sikh family retrieve their possessions that had not been entirely destroyed by the storm. The downstairs of this house was completely flooded and everything was ruined by water and mold. We were taking things out from the top story and bringing them to vehicles waiting to take them to the place where the family was staying. There was a bad sulfur smell all over New Orleans that, over time, you would have to get used to. However the base floor of the house, which we had to pass through every time we were carrying things down from the second floor, offered a new smell each time and it was hardly bearable. There were dried dead fish lying all over the streets. The water killed all the plant life as if it were toxic. On that Saturday they were only allowing business owners to return to their businesses so as we tried to get to the house we were stopped by blockades and military personnel twice until we found a route that had no blockades.
Sunday I participated in some of the Gurdwara in Baton Rouge and then went to serve food in a Church. There were only around thirty people left at this shelter and traffic was bad so it took us less time to serve them lunch then it took us to drive there. 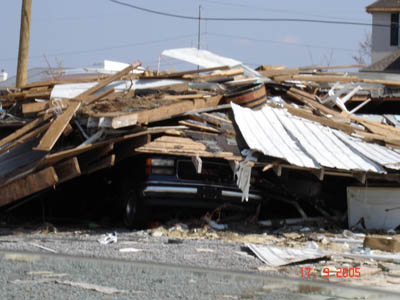 A feild of rubble in New Orleans (left). A SUV covered in wreckage (right)

Day before the last group of us left, we took a trip down to New Orleans. One of the Sacred Heart Women's schools needed our help in transferring school supplies to their new, hopefully temporary, location. At the school, we had to move supplies from three different floors. Climbing the three flights of stairs in that humid heat seemed more dramatic. The school had minimal damage, but since the city is in bad condition, continuing school there is not an option.
We loaded up the supplies in three different vehicles, two vans and a car, and headed over to a town two hours away from New Orleans called Laffayette. When we arrived, there were about ten people from Sacred Heart standing in the parking cheering, clapping, and happy to see us. They expressed sincere gratitude and appreciation. We helped bring in the supplies and spent a few moments chatting. They were kind and accepting. No feeling of resistance to our turbans and bana. I felt grateful to be there helping these people. It was an inspiring experience.

here are some more pictures I took. 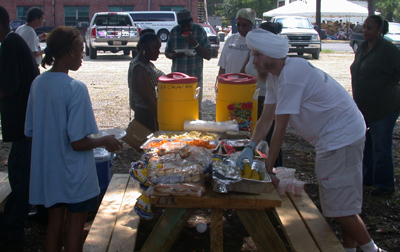 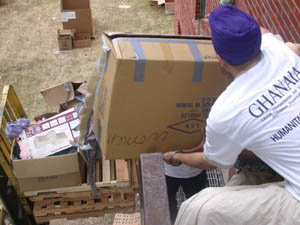 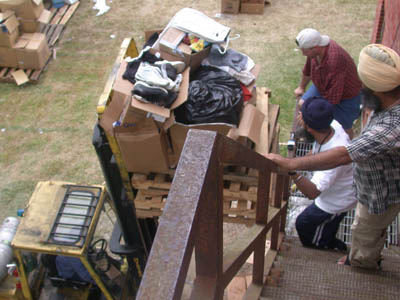 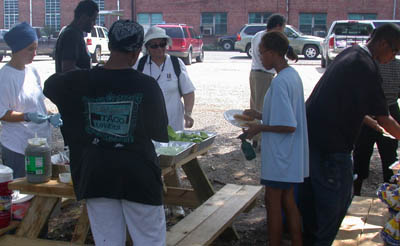 The forklift lifting up clothes for us to bring inside (left). Sat Avtar Kaur serving food to evacuees (right). 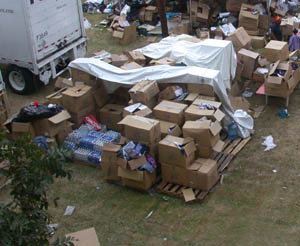 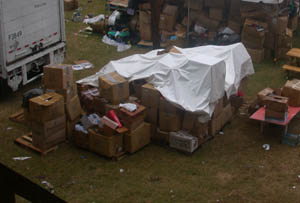 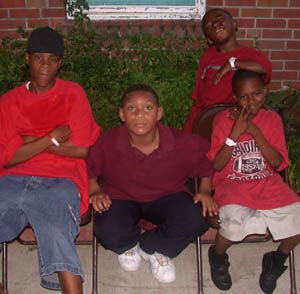 Before and after pictures of the crates of clothes we moved. look at the red table for reference (left, middle). Some kids at the shelter (right). The 2 on the right we helping us move boxes briefly, but mostly they were running around having fun. They suddenly got very serious for the photo. 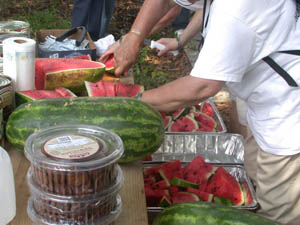 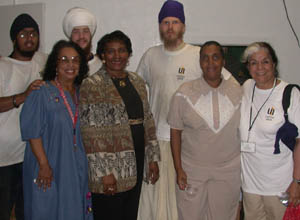 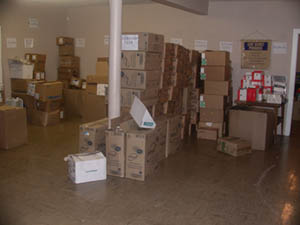 Cutting watermelon (left). United Sikhs with some of the shelter organizers (middle). A room we organized. Sorry no before pic. (right). 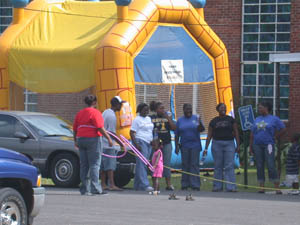 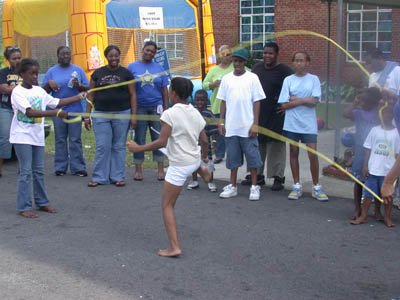 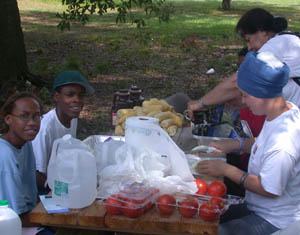 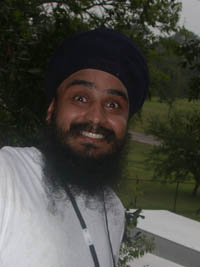 Some kids after they helped us shuck corn (left). Zoravar Singh almost falling of the railing (middle). Choppers at the airport (right).