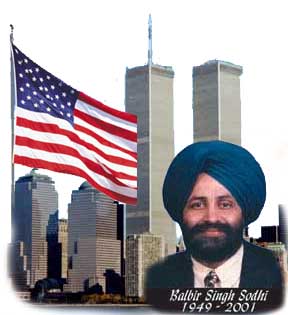 You are humbly invited to attend
September 14th, 2002

As the media focuses on the first anniversary of September 11th, the little town of Mesa, AZ and the Sikh community of Phoenix, AZ are once again drawing national media attention. Last year, on September 15th, Balbir Singh Sodhi was killed in what would be the first backlash hate murder post-September 11th. Since then, the Sodhi family and the Phoenix Sikh community have taken every opportunity to share the Sikh messages of unity among all people and the need to protect the innocent.

On September 14th, the Sodhi family and the Phoenix Sikh community will host Embracing Diversity: Balbir Singh Sodhi Memorial Event. The memorial will honor not only Balbir Singh Sodhi, but all those who have died in the last year in backlash-related murders. The event will feature government and interfaith speakers, musicians and prayer, and will encourage unity and harmony among people of different faiths, races and backgrounds while speaking against hate-related violence. There is a potential for significant national coverage of this Memorial that will give the public an opportunity to see the universal values and spirit of the Sikhs.

On behalf of the Sodhi family and the Phoenix Sikh community, we invite you to support this event by attending and encouraging your friends to attend, as well. The event will take place at Red Mountain Park, 7800 E. Brown Road in Mesa, Arizona (USA) from 7:00 - 9:00 PM on September 14th. This Memorial gives us a rare opportunity to share the Sikh spirit with the media in a positive and uplifting way.

Read Stories about the Sodhi Family and the Event:

Full Circle: One Year Later, the Family of Balbir Singh Sodhi Moves On

Please support this event with your financial contributions.

The story of Balbir Singh Sodhi's tragic death has opened the heart of the media and the public about the Sikh religion. In honor of their brother, Balbir Singh, the family has created the Balbir Singh Sodhi Embrace Diversity Fund. This fund will provide educational materials and create events that encourage deeper understanding, respect and support for all cultures and beliefs. The September 14th Memorial is being sponsored by the Sodhi Family Embrace Diversity Fund.

Even though the city of Mesa, Arizona has been very generous in donating the Red Mountain Park facility for this event there is a significant expense associated with hosting the memorial. The Balbir Singh Sodhi Embrace Diversity Fund, is covering a significant portion of the expense but we need your financial support as well. Please give generously to the Balbir Singh Sodhi Embrace Diversity Fund. Contributions are tax deductible in the United States. You can do donate by credit card online by clicking here.