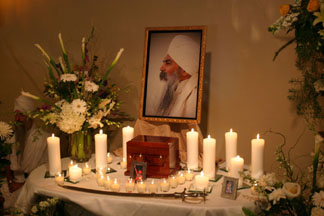 Family members, students and friends joined with religious and political leaders from around the world. They came together to both mourn the passing and celebrate the life of the man who brought Sikh Dharma to the West.

A funeral wreath was sent by the Government of India from Prime Minister Dr. Manmohan Singh. A message of condolence was given from the President of the United States George Bush to the family and was conveyed by Ravi Singh, President of the internet-based company Electionmall.com. New York Senator Hilary Clinton phoned the day before, expressing her condolences to Dr. Inderjit Kaur, also known as Bibiji, Yogi Bhajan's wife. Barbara Richardson, the wife of current New Mexico governor Bill Richardson, was also in attendance. 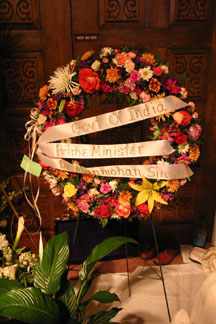 Long-time friend of Yogi Bhajan, former New Mexico Governor Bruce King, spoke at length about his relationship with Yogiji and Yogiji's positive impact on the state of New Mexico. Other long-time friends, as well as Sikh and inter-faith community leaders also addressed those gathered. The speakers shared warm memories of their times with Yogiji and praised his work in bringing the message of the Sikh Gurus to the West.

By far, the most touching and poignant addresses came from Yogiji's two sons, Ranbir Singh and Kulbir Singh, and his two grandsons, Angad Singh and Fateh Singh. 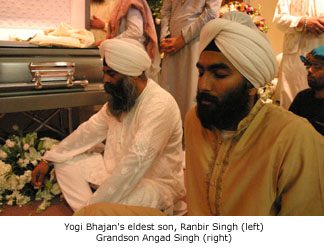 Angad Singh told a story about how he would sometimes be nervous around his grandfather. But Yogiji would hug him so tightly, his eyeballs would almost pop out of his head. "These are my most cherished memories," Angad Singh said.

Ranbir Singh, Yogiji's eldest son, was the last to address those gathered. He began by saying, "I have been listening to the other speakers today…and they are saying everything that I wanted to say. So let me speak not about the past but of the future."

Ranbir Singh paid tribute to the pioneer work of his father – bringing Sikh Dharma into the West. He and Kulbir Singh both expressed their commitment to following their father's example and continuing the work he began. Ranbir Singh also emphasized the need of the two communities – Western Sikh and Indian Sikh – to work together, to listen to each other and learn from each other. 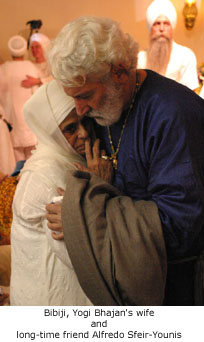 The program also included Sikh devotional singing and chanting. As is the practice in the Sikh religion, the service ended with the cremation of the body. Sikhs believe that cremation makes it easier for the soul to leave the earth and return to God. While the cremation was taking place, many joined in a special 31 minute meditation, originally taught by Yogi Bhajan in 1978, that was to be done during the cremation of a great sage.

Sikh last rites, known as the Bhog, and a Memorial Service will be held on October 23rd following the traditional period of 17 days of prayer, meditation and celebration. The Memorial Service will be held at the Hacienda de Guru Ram Das ashram in Espanola, New Mexico and will be an opportunity for those who could not attend the cremation ceremony to say their final farewells.

Information on these and other events will be posted on http://www.SikhNet.com/YogiBhajan

View additional photos from the event.

Watch video clips from the cremation ceremony and memorial service.