SikhNet is truly a labor of love. SikhNet went online for the first time in 1983, as the first computer presence for Sikh Dharma. Some of us used clunky Teletype terminals that printed slowly - we had no computer screens to look at. Others used early computers like the Kaypro (anyone remember CPM?). The whole thing was run on a server through GEnie and we connected at 300 baud! Harbhajan Kaur and Mahan Singh in Millis Massachusetts were the coordinators. The technology we used then seems primitive now, but at the time it was very exciting to us cyber-pioneers.
From February 1986 until October of 1994, SikhNet was online as a computer bulletin board system (BBS) running on a 10 Mhz IBM XT clone computer with a 1200 baud (later 9600 baud) modem. I used an early version of free BBS software (RBBS v.15) which I had hacked severely to customize it for SikhNet. We had about 100 users, 20 of whom were quite active. The logon screen consisted of a large kanda done in ASCII art.

Ravi Har Singh stayed up late many a night, with his recently broken leg propped up on cushions, writing a dedicated Clipper progam for accessing SikhNet. It was called "SikhNet-Zapper". We didn't have "live chat" at that time, but we had an early discussion forum and announcements from 3HO & Sikh Dharma International were posted for all to read. We could download files and transcripts of the Siri Singh Sahib's talks all over the world, and each day a new quote from the Siri Guru Granth Sahib, or the lectures of Siri Singh Sahib Yogi Bhajan greeted each member who logged on to the system.

During this time, SikhNet's host computer moved from Columbus, Ohio to Yosemite, California to Espanola, New Mexico as I and my family moved from place to place.

For ten years, SikhNet was up and online 7 days a week, 24 hours a day, but it finally stopped in October 1994 when I was no longer able to serve as the Sysop (System Operator).

I prayed to Guru Ram Das that someone else would come forward to restart this valuable service and take it on to the Internet. Restarting SikhNet was also talked about in a subcommittee of the Khalsa Council of Sikh Dharma International, and a team of people devoted to the concept was formed.

After SikhNet had been offline over a year, by the grace of God and Guru, Gurumustuk Singh, our wonderfully talented and creative young Webmaster appeared. Through the efforts of the development team, through your donations, and in collaboration with Sun & Son (a Khalsa owned software development firm based in New Mexico), SikhNet was funded and finally reborn on the World Wide Web on March 24th 1996.

The SikhNet development team is Gurumustuk Singh, Guru Jot Singh, Guru Nam Kaur, Ashvinder Singh and myself (Guruka Singh). With Guru's blessing, this Web site will continue to serve us all and give us all an opportunity to connect and grow. 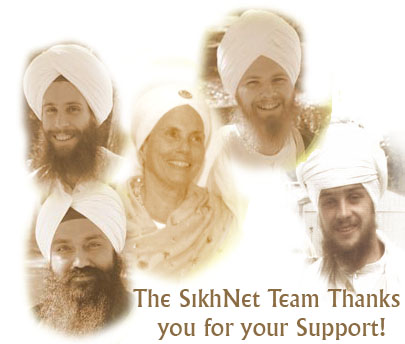 Surf Sikhnet in the Past using the "Wayback Machine"

Make a contribution to Sikhnet