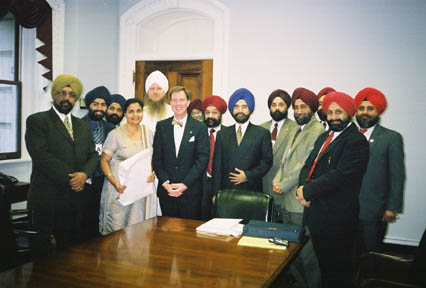 WASHINGTON, D.C. (September 29)-Several Sikhs from all across the United States met Monday with a top Bush aide at the White House to have a dialogue on issues of concern for the Sikh community and to offer the Sikh community's support. Tim Goeglein, director of the Public Liaison Office, met with Sikh leaders for over an hour to discuss several national issues including hate crimes and unity within American communities concerned with terrorism. Sikh leaders also suggested that the Bush Administration consider the appointment of a Sikh to a post within high ranking government offices to help curb hate crimes, intolerance and insensitivity.

This meeting was arranged by the efforts of Sikh Council on Religion and Education (SCORE), a national civil rights and education organization addressing the concerns of Sikh Americans. "We wanted to convey to President Bush that we as Sikh Americans want to participate fully in his efforts to make America strong and to bring this nation together during these testing times," said SCORE National Chairman Dr. Rajwant Singh.

Satinder Singh Rekhi, a CEO of a large consulting company from Sacramento, California said, "We believe that the time is right for the Bush Administration to appoint a Sikh to a high ranking position in the government. There are a large number of qualified Sikhs in the fields of medicine, education and business. The Sikh community needs to develop a relationship with the White House and today's effort was a good beginning and it has to be carried on."

Guru Amrit Singh Khalsa, National Affairs Advisor to Sikh Dharma International, said, "The Sikh community is in an excellent position as an inclusive group to help the Bush Administration's agenda of creating a global understanding of different diverse faiths. That is what we have tried to convey to President Bush."

Dr Singh, who was invited by President Bush immediately after the tragedy of 9/11 along with leaders of many faith communities, said, "We conveyed the message that Sikhs are eager to serve this nation in all aspects. Even though there is great ignorance about the Sikh faith and Sikhs had to face high numbers of hate crimes after the tragedy of September 11, still we want to be full partners in sharing the burden of carrying this nation forward. It is quite evident from our history that we as a community have always focused on the positive side of the picture. The Sikh Americans are loyal and patriotic citizens. Sikhs are partners in strengthening the American society which is based on equal opportunity and mutual respect."

"I was pleased to spend time with this great group of fellow Americans," Goeglein said about the meeting. "Their patriotism, and their love of family and community, was inspiring."

Harjit Singh Sodhi from Phoenix, brother of Balbir Singh Sodhi, a Sikh killed in Arizona immediately after 9/11, with tears in his eyes, expressed strongly that, "America is our homeland and we will do whatever to make our communities strong wherever we live. We will sacrifice to protect the freedom of this nation." He detailed the support his family received from the county and state officials and most importantly from the general public.

Although Sikhs have resided and worked in this country for more than 100 years, the aftermath of the 9/11 attacks revealed that many Americans are ignorant of Sikh beliefs and their identity. Because of their distinctive identity due to their turban and beards, they are erroneously associated with perpetrators of the attacks on 9/11. Hence, half a million Sikhs in the United States are now a vulnerable minority. Since 9/11 over two hundred hate crimes against Sikhs have been reported in America. Four days after the 9/11 attack, a Sikh, Balbir Singh Sodhi was shot and killed in Mesa, Ariz., apparently a hate crime.

Sikhs have lived in the U.S. since late 1800's and have played an important role in cultivating large farms in California where the population of Sikhs is the largest in the United States. One of the largest peach-growers in California is a Sikh. The first Sikh temple or Gurdwara was built in 1910 in Stockton, California. The largest concentration of Sikhs is in California and New York. They are also present in large numbers in Michigan, Florida, Illinois, Ohio, North Carolina, Texas and Washington, DC area. Their increasing presence is bringing them to positions of leadership in various forums.

Sikhs have been playing an active role in civic life of America. The first Asian American to be elected to U. S. Congress in 1962 was a Sikh from California. Sikhs were part of a coalition of many faith communities lobbying the U.S. Congress for the passage of the Religious Freedom Restoration Act and recently for the not yet passed Workplace Religious Freedom Act.

Founded in 1998, SCORE's mission is to present the Sikh perspective in public forums, interfaith discussions and throughout government agencies to promote community understanding and a just society for all. SCORE pursues harmony and mutual respect among different religious communities and people through interfaith dialogue and activities. SCORE is based in Washington, D.C. and has represented Sikhs on many national and international platforms.