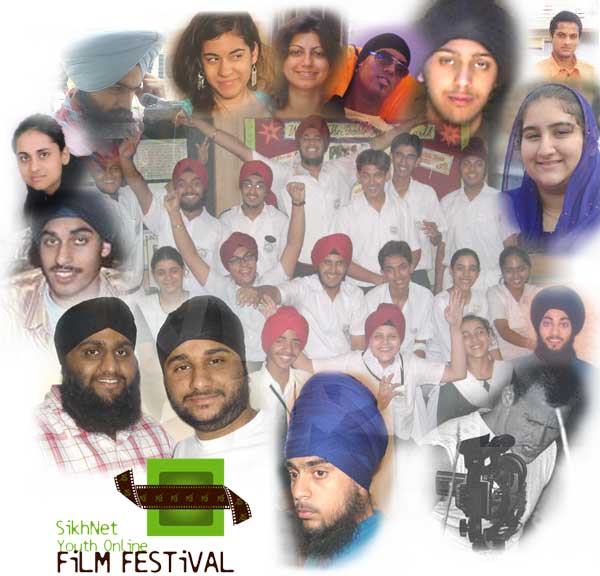 CONGRATULATIONS to all the participants! All of us at SikhNet consider ALL of the films to be winners! Each and every film is unique and interesting in it's own way. The festival was designed to encourage and inspire our youth to get involved in media and film and use their creativity to produce interesting and educational pieces designed to spread the spirit of Sikhi. This has happened with great success!

The competition part for prizes is only there to help motivate youth to take the time to produce something of quality. Plus, it can be fun to compete and have a chance to win cash prizes!

We hope that all the viewer's and participants feel encouraged as to the power of making a short video/film to communicate a message, and that you don't need to be a "professional" to do so. We plan to hold another online youth film festival in 2007 and we welcome you to participate!

We hope you'll take the time to watch all the films, read the comments by others and share your own thoughts about each of the videos submitted to the film festival. This gives valuable encouragement to the producers and promotes dialog on the topic of the film.

Our very qualified panel of six judges have watched all the qualifying films and submitted their results. The winners of the 2006 SikhNet Youth Film Festival Competition are as follows:

Watch all the videos submissions

Comments by participants in the SikhNet Youth Film Festival:
"I know that even beyond myself, people were touched with the effort and seva put into this film festival. The fact that it was directed towards the youth made it evident that there is a push to make the younger generations realize that it is our turn to take steps into the Sikh community and create an impact. The fact that others are allowed to now view my documentary all across the world is relieving, because that's why I put it out there - for inspiration. Thank you SikhNet for this wonderful opportunity!"
- Raj Singh, 17 years old, Texas, USA.

"The best thing I liked about this contest was that it helped me think that even I can do and contribute something to this amazing (Sikh) panth of ours. As you said it has and it will surely inspire the hidden talents inside the mind of today's youth. The overall experience was great. I was able to get valuable information from other videos that I watched. I have realized now that to do something is far greater than just talking about it. Once again thank you Sikhnet for opening the minds of youth."
- Karandeep Singh, 20 years old, Ontario, Canada.


Comments from one judge about the SikhNet Youth Film Festival:

What did you like about the contest?
"When Robert Frost had to choose between the two roads that he wanted to walk on, he chose the untrodden road - 'the road not taken'. This decision of Frost has been fossilized in my mind ever since my childhood. It is very hard to take the path, which doesn't have footprints. What would it be like? What will I encounter? What are the risks involved? Is it worth giving it a shot? In spite of the entire dilemma you say, "yes" I have got to go ahead. Sometimes an individual's decision can create an opening for an entire generation. We seldom realize that. That's exactly what the 'the first ever' Sikhnet Youth Online Film Festival has done. This festival took the path - took the lead for many others to follow. It is like the lighthouse and the young filmmakers like the sailors getting directions. Secondly, it is the simplest and the best way to have a 'Sikh media revolution'. It can churn filmmakers and their creativity to its very best. Moreover, it can reach every house, every individual and every mind just by the click of a mouse. I have seen all the videos and will recommend every Sikh household to have one's own original DVD - it will always be a prized possession. I congratulate everybody associated with Sikhnet for taking up the cudgels to execute this original idea."

What was your experience judging the videos?
"Every professional filmmaker has a tutored mind, I feel. The child like sense of wonder, 'Vismaad' is lost somewhere - that is exactly what I felt while watching the videos. Because there was a kind of truthfulness in every effort that the young film makers had made. While judging initially it was started with the baggage of professionalism, which had to be soon set aside in the light of the sincerity with which every filmmaker dealt with the idea. So what I felt was the most difficult thing for me personally, that was putting away the 'professional baggage' and access everything from the heart - and it worked. After all, ultimately content is all that matters, the medium of conveying it could be good or bad but sometimes if it is strong enough it will hit the audience. I as a filmmaker or a theatrical person always rate my audiences as the ultimate judge. A filmmaker has a great responsibility on his/her shoulders and has a huge audience watching the product, he/she just can’t go ahead and make what he/she feels like; he/she has to think logically and that is where I felt most of the filmmakers were successful in. It was evident that a few videos were made in a hurry. It seemed they kept everything for the last moment, while others seemed to have been completely polished and specifically designed for this festival. All the best to all the filmmakers. I do see the manifestations of talent in these budding artists that can help 'Sikh media' to flourish and become a part of the international cinema soon."
Comments by Ish Amitoj Kaur, producer of the film Kambdi Kalaai.