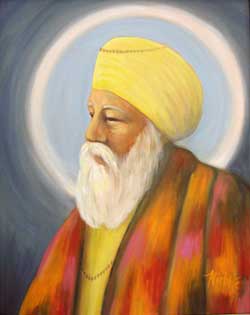 Guru Nanak always said that his Guru was the "Shabad" the Word. Bhai Gurdas says wherever Guru Nanak went he made human beings realize the supremacy of "Shabad." "There is no miracle other than the Word," were Guru Nanak’s words. When the sidhas asked how he became spiritually strong, Guru Nanak answered, "Other than the company of ‘Bani Guru’ I have no other strength or shelter." Bhai Gurdas has written that is was only through the word that Guru Nanak could conquer the whole world. The Yogis also asked Guru Nanak who was his Guru?

Who is the Master whose disciple thou art?

and the answer was

The holy word is the Preceptor by devoted meditation on it am I its disciple.

Whatever and whenever the Shabad manifested in his heart, Guru Nanak wrote it down in a book he always kept with him. Bhai Gurdas in one of his Vars says that when Guru Nanak went to Mecca, he had two things with him, asa and kitab (stick and book.)

This book can only be the book in which he wrote the Bani. This is also why the Quazis and Mulla(n)s asked Guru Nanak, "Open your book and tell us who is greater, a Hindu or a Muslim?" (Bhai Gurdas, Vars) 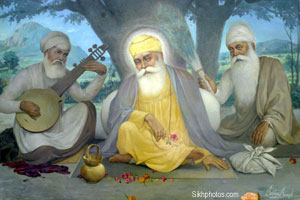 There were times when Guru Nanak and Bhai Mardana were all by themselves in jungles. Whenever Guru Nanak felt like singing Bani, he used to ask Mardana to play for him. He used to say, "Mardana start playing the rebek. Bani is coming to me." There was no one else then who wrote that Bani, but Guru Nanak himself. In his journey wherever Guru Nanak went, he met Hindu and Muslim saints and held discussions with them. He collected the hymns of those saints whose thoughts were similar to his own. In his first journey, he collected the hymns of Kabir, Bhagat Ravi Das, Jai Dev, Nam Dev, Beni, Parmanand, Bhagat Surdas, Sain and Dhanna. In his third journey, he collected the hymns of Baba Farid and Bhagat Sadhana. Guru Nanak’s own Bani testifies that he started editing Bhagats’ Bani. For example, Baba Farid wrote a hymn

Listen, thy Man, thou didst not look to the tackle of my boat while it was yet time. In the swollen lake, how shall it float? (1)

Guru Nanak put his hymn in Raad Suhi. Then he put a hymn of his own to explain the other side of Baba Farid’s hymn:

With contemplation and austerity equip thy boat, where by easily mayst thou cross over. Then shall there not be the ocean nor the storm. Easy shall thy path be. (1)


All the hymns that he collected in his journey he wrote in same kitab. (The Book).

Guru Angad wrote the Gurmukhi script and put his own Bani in sloks along with the Bani of Guru Nanak. This book was then called Pothi. He passed this Pothi to Guru Amar Das. Guru Amar Das edited it. In some places he even explained Guru Nanak’s and Bhagats’ thoughts. This whole treasure of Bani then was passed to Guru Ram Das, the fourth Master. And from him it passed to Guru Arjan Dev. At that time it was called Aad Pothi.

Throughout all this time, the Gurus preached to the Sikhs to be attached to the Word rather than the physical body of the Guru. When Prithi and Kheda came to Guru Nanak in Kartapur, they wanted to quit their worldly responsibilities and live with Guru Nanak, enjoying his darshan all the time. Guru Nanak told them, "I abide in the Sadh Sangat. Go to Dharmsala early in the morning and also in the evening, serve the Sadh Sangat and sing Gurbani. By doing this you will be serving me and I will always be with you. Now go back to your village and perform your worldly duties honestly. If you meet the physical body of the Guru, you must one day be separated from him. But if you attach yourself to the ‘Word’ of the Guru, you will never be separated from Him." (Bhai Mai Singh, Sikhaa(n) dee Bhagat Mala.)

To sing and recite Bani was the strongest practice of the Sikhs.