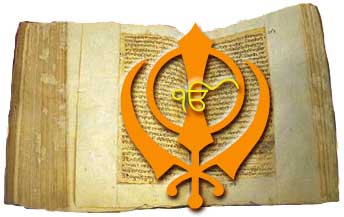 Guru Arjan planned to arrange the writing not by subject, but accordingly to musical measures, or 'Raags' in which the hymns are meant to be sung. The composition which is musical is also metrical, and so follows definite metrical schemes. So on this basis, the Hymns of Shabads are divided into different parts or padas. Each pada consists of one or more verses. The other divisions are pauris, sloks, chants, swayas, etc.

There are some compositions with special headings and with special meaning or for specific purposes like ‘Lava(n)’, the marriage song written by Guru Ram Das. The Sloks of all the Gurus were at one place. Vars were only composed of pauris. According to the subject of the Vars, Guru Arjan selected the sloks and put them with the pauris. The sloks which were left over were put at the end under the heading, ‘Slok Vara(n) Te Vadheek.’ So, in this way the Pothi was divided into four major parts.

First came the Banis of the Nitnem – that is Jap Ji, Rahiras and Sohila. Second was the Bani in Ragas, which makes the major portion of the Sri Guru Granth Sahib. Each Raag starts with the compositions of the Gurus and ends with those of the Bhagats. Third was that Bani which was not in a specific Raag. That is saihaskritee sloks of Bhagat Kabir and Bhagat Farid, and Swayas of Guru Arjan and the bards (Bhatts). The fourth and last portion was the remaining sloks and concluding hymn, ‘Mundaavanee’ (seal) written by Guru Arjan. At the end is the Raagmala, the list of the Raags in the sequence of the traditional Indian catalogue style popular then.

He put the swayas of eleven bards following his own swayas. The swayas written by bards are in praise of all the five Gurus from Guru Nanak to Guru Arjan. The eleven bards are as follows: Kal Sahar, Jalap, Kirat, Bhikha, Sal, Bhal, Nal, Gayand, Mathura, Bal and Harbans.

(1) He rejected the Raags which were expressive of excessive exuberance or sadness.

(2) He did not use Raagas according to the Indian catalogue style popular in those times, as the ragas were divided into families, sons, daughters, and wives called Raaginis. But Guru Arjan did not make any distinction between a raga and a raagini. Raaginis were also used as ragas. Raaga literally means something that colors or tints the mind with some definite feeling. Raag also means love, attachmend.

(3) He did not include the poetry of the saints which gave the slightest feelings of ego, discrimination, caste consciousness, sex, prejudice, degradation of human life and renunciation, etc.

(4) The language that he used was the accepted vehicle of literary expression at that time. The metaphor of the Bani is homely and direct, such as one would experience in the daily course of one’s life.

(5) Each hymn was very carefully numbered so that no one could add or subtract any hymn of any verse.

(6) The poetry of the Bhagats was also selected and edited because people had also started writing poetry under their names.